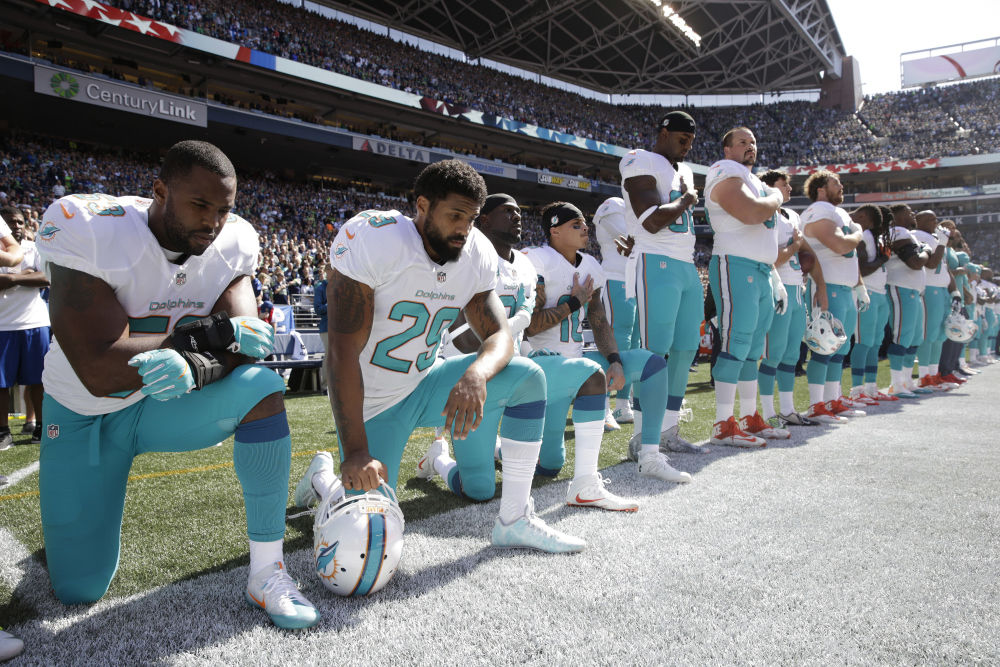 From left, Miami Dolphins' Jelani Jenkins, Arian Foster, Michael Thomas, and Kenny Stills, kneel during the singing of the national anthem before an NFL football game against the Seattle Seahawks. (AP)

From left, Miami Dolphins' Jelani Jenkins, Arian Foster, Michael Thomas, and Kenny Stills, kneel during the singing of the national anthem before an NFL football game against the Seattle Seahawks.

On Kneeling During the National Anthem

Recently, there has been an uproar in mass media concerning the NFL; this is not because of any deflate-gates, or controversial CTE diseases, but because of a new form of protest adopted by some NFL players: kneeling during the national anthem. All of this contention began with Colin Kaepernick, a football player for the 49ers, when he kneeled during the playing of the national anthem to protest racial inequalities in America. From there, more players began to adopt this silent protest, and they have split the nation on whether this is a just protest of racial inequalities protected by the First Amendment or this is a rude form of disrespect to our country.

America: A Nation of Freedom or Censorship?

America is a nation that has historically been embroiled in racial conflicts between the black and white communities; recent tensions include the Charlottesville massacre and incidents of police brutality/systematic oppression of people of color.

The entirety of my argument can be summed up in this one point: modern-day Nazis, who unflinchingly stand by the ideologies that led to the deaths of 5 million innocent Jews and deemed enemies of the harsh Nazi regime, have the right to wave around tiki torches and swastikas while screaming “blood and soil” according to President Trump. But somehow, in some totally-not-race-related-way, people of color are “sons of bitches” who are not allowed to silently kneel during the national anthem at a football game to protest racial inequalities in America. If silently kneeling during the national anthem is more “un-American” than Nazis or Confederate flags, we have more problems in America than we thought.

Undoubtedly, the anthem is a symbol of national pride and honor, especially for our country’s veterans. Many people are claiming that kneeling during the national anthem is a huge sign of disrespect to our hardworking veterans, who sacrifice their lives for the sake of maintaining the freedom of America. However, these silent and peaceful protests are truly a way of respecting and utilizing the very ideals of freedom of expression that soldiers fight and die for. What is the point of bolstering our so-called legacies of freedom of speech and having citizens die for this very freedom if people are not allowed to use it? Claiming that protestors should not use their freedom of speech because they should be grateful to have freedom of speech is a paradox within itself.

Veteran, former prisoner of war, and Senator John McCain commented on the situation, “That’s their right to do what they want as citizens.”

In any event, the whole conundrum over the supposed disrespect to the American flag is a diversion from the real issue at hand: racial injustice in America. NFL players are not protesting veterans or the American flag or anything of the sort and everyone knows it because they are open about the root of their discontent. In fact, the outrage that arose from their simple protest is another example of the very point of injustice and inequality that the people of color were trying to expose.

No matter how people may try to frame the issue at hand, the black protesting NFL players are American citizens who are entitled to their freedom of speech and right to peacefully protest against the lack of equal opportunity that faces them in modern-day America.

Now: The Flag, Next: Who Knows?

The term “citizen”originates from the term “inhabitant of a city” As in, we are all citizens of the United States of America. The United States flag is a symbol of purity, valour, and justice. It represents American sacrifice, the soldiers who have fought for our freedom, and ultimately unites all American people as citizens under one object. People honor the flag to show citizenship, unity, and to be united as citizens regardless of race, religion, ethnicity, or beliefs. By showing any disrespect at all to this, one is implying that they are not proud of their American national identity. Thus, it is completely unacceptable for American citizens, especially those so widely known and displayed over television such as national football players, to take a knee and blatantly showcase disrespect during the National Anthem.

Starting at a young age, schools teach children to stand up when reciting the pledge of allegiance. When a priest walks into the room at a church, you stand. When a judge walks into the courtroom, you stand. Standing is a sign of respect. So, why wouldn’t one stand during the national anthem – a time of honor towards the American flag and those who fought for it? Emma Hogan, sophomore student at Wayne Hills and daughter of a retired U.S. Army member, strongly supports the argument at hand. Ms. Hogan is reported stating, “As a military brat, I know that the U.S. flag is  representative of the soldiers that fought for it and continue to fight for it everyday, people like my father. When someone doesn’t stand during the national anthem, I feel personally offended by their outright disrespect. If they don’t want to stand and respect our country, then they don’t have to be a part of it.” Emma is absolutely correct.

There is a time and place for everything. Would one protest women’s rights during a funeral? Would one stand up for animal rights during a church seminar? There is a time to protest black rights, as well as human rights, women’s rights, and animals rights. The approximate one-minute period that it takes to stand up and sing the national anthem is not the time for football players, nor anyone, to take a knee and protest black-rights.

As a society, if we start disrespecting the flag, where will we end up next? Why should football players have the sole right to compromise respect and honor and disrespect the most important symbol of American unity? They shouldn’t. No one should. The American flag and national anthem represent unity. Under the flag and national anthem of the United States of America, citizenship comes first and everything else – race, religion, ethnicity, etc. – comes second.