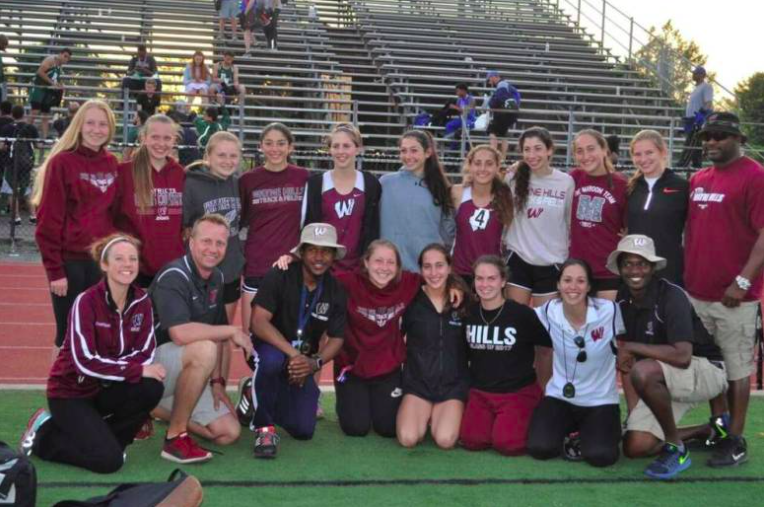 Many of the girls on the Spring Track team are looking to have a lot of success this year.

March has arrived and the leaves are coming back on the trees.  That means that WHHS students will prepare for their spring sports

The golf season is currently underway. The roster for golf season is basically permanent. The first practice starts on March 6 for both the girls and boys. Practice will go from Monday through Thursday. The team will have to join the county and pay a required amount of money. The practice rounds will start on March 16 and their first real competition will be on April 3. The team will look to improve from last year, as they were 6-4 and come out as one of the stronger teams this year. The Patriots will look to still have their bragging rights against Don Bosco Prep and win again this year as they did last year.  “We are hoping to have another good year as we are returning many many starters such as Robert McHugh, Cassandra Lee, and James Bradley.  It certainly will be hard to replace our captain, Joe Koslowski.  We have a large squad this year and are still looking for three more Varsity players,” said Coach Mark DuBois.

When you see the tarp rolled and the grass mowed to perfection, you can tell that baseball tryouts have begun.  Wayne Hills will look to duplicate the success of last year’s season and possibly even improve.  The Patriots went 22-6 last year and finished first in their conference.  They notched some pretty impressive wins and many of those came in a dismantling of the other team.  The team will have a new coach and are still looking for a replacement to lead the team in that spot.  Students from freshmen to seniors will try to get a spot on the team for the next week.  “Our expectations this year are the same as they are every year. We also hope to win the Passaic County Championship as well as the State Championship.  With the loss of Zaccone’s bat, we hope to rely on our strong pitching staff,” said junior Frankie Terranova.

Boys volleyball will be starting up soon as well, and the team will look to improve from a 13-11 record last year.  The season will start on March 16 at Teaneck, which will certainly be a tough match for both teams as it is the first of the season.  The two teams will both be trying very hard to start out 1-0 in this one.  New players will get to learn how to play with their fellow teammates.  It should be a fun season.

The lacrosse season will be starting up soon, too. So far, to prepare for the season, they have been lifting and becoming stronger so they can destroy their opponents. The team will look to have a better season this year than they did last year. Last year, they had a record of 7-8 and 2-5 in league play. They will get some experienced players coming back this year, so this team should have large expectations. They also have an outstanding freshman playing for them whose name is Mike Joyce. He had plenty to say about the honor of playing varsity as a freshman. “It’s a real honor of playing varsity as a freshman. I’m going to look to try my hardest and help this team win as many games as I can help them win.” The lacrosse team’s first scrimmage will be up against Nutley High School on March 9.

The boys tennis team will look to follow up a 14-3 season last year with hopefully an even better one this year.  It will be no easy task to try and continue the success the tennis program has had, but this year’s team is very good, led by captains Jake Goldberg, Ethan Gershorgin, and Arjun Gurumurujan.  The team will practice hard and will look to continue their success.  “I think we have some very talented athletes trying out for the team this year, and I expect a high level of competition for both the Varsity and JV teams.  We have five returning players this year and our captains will lead this team.  Coach Green and I are looking forward to a competitive season,” said Coach Bruce Keogh.

Spring track is also one of the most popular sports in the spring season. This year they will be looking to run the table. They are looking to improve from last season and win the North 1 Groups 2 and 3. They will also look to win the NJSIAA Meet of Champions. They will also look to win the 123rd Penn Relays. Their first meet will be the Doc Boverini Relays. “I’m so excited to be joining the track team. I’m going to look to help the team win as many events as possible.” said Ilona Margolin, a freshman.

With all the spring sports coming up, this means it is officially the end of winter sports. All the Patriot teams will look to have successful seasons and bring back many trophies to Wayne Hills as they can.