Grayson Allen and His Many Incidents 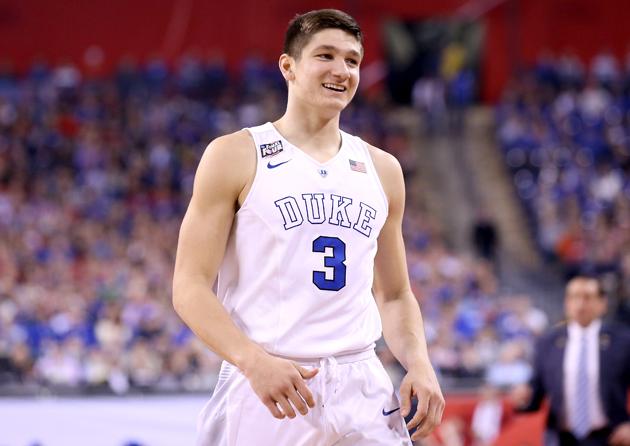 Grayson Allen is arguably the most controversial player in college basketball.

Duke basketball.  One of the most loved and most hated programs in the nation.  Duke has had its fair share of players that college basketball fans absolutely despise, the most popular of those being Christian Laettner.  Duke has a current player who fans are saying may even be more hated than Laettner, Grayson Allen.  Last year, Allen had two incidents of clearly intending to trip his opponent.  The first came last year against Louisville, February 8, 2016.  Allen was laying on the ground under the opposing basket. When Ray Spalding grabbed the ball he suddenly fell to the ground.  Replays showed that when Spalding tried to advance the ball up the court, Allen stuck his leg out to trip him.  Nothing came of this incident.

Later that month, on February 25, Allen tripped Florida State’s Xavier Rathan-Mayes.  This happened on an inbound pass with 5 seconds left, the game was already over as Duke was up big.  Rathan-Mayes tried to run behind Allen, when Allen stuck his foot in the air behind, clearly showing intent to trip the opposition.  Rathan-Mayes fell to the ground.  No foul was called, but this provided much talk in the sports world.

This season, Allen came in as a junior.  People thought he would show a bit more maturity, but that obviously did not happen.  In a game against Elon, Allen had another tripping incident.  This time Steven Santa Ana was the victim.  Santa Ana was driving, when he cut back and Allen was called for the foul.  Instead of stopping, as Allen was falling to the ground, he grabbed Santa Ana’s arm and wound up with his leg taking out Santa Ana’s legs.  Allen received a technical foul and was sent to the bench by Coach K.  When Allen went to the bench, he started to punch the chairs and yell.  He continued to punch the chairs in rage.  He started to cry during this fit and eventually calmed himself.  This cannot be the kind of leadership any basketball program should have.

Duke basketball suspended Allen indefinitely.  He sat the next game against Virginia tech and Duke got dominated, the final was 89-75.  Allen returned from his “indefinite suspension” after one game.  This caused much controversy and people were saying that the punishment should have been worse.

On January 10, in a game against Florida State, Allen had another incident.  Allen attempted to save a ball from going out of bounds, and he went crashing into the Florida State bench.  While he was falling, a coach attempted to grab him, and it seemed as though Allen deliberately shoved the coach out of the way.  All of this happened during another Duke loss.  The replay causes much controversy, as it seems he pushed the coach, but no suspensions were handed out as it was not conclusive enough.

Over the next few games, opposing players attempted to pester Allen, and there was a some pushing and shoving going on.  Then on January 28, a brawl almost started between Duke andWake Forrest and Grayson Allen was at the center of it.  The whole game was chippy, and Wake Forest players were trying to provoke Allen.  Then, as a Wake Forest player scrambled to get the ball from going out of bounds, Allen grabbed his arm.  This happened by the Wake Forest bench and players rushed over to Allen.  A huge group formed with pushing and shoving going on and Allen was in the middle.  Then, Wake Forest’s, Brandon Childress ran into the group and grabbed Allen.  It seemed as if he was trying to pull him away, but Childress and Allen both fell to the ground and replays showed Allen getting tackled.

All of these incidents are being looked at by all college basketball fans as well as analysts, and many people say that Allen needs to be suspended for a long period of time or that he should voluntarily sit out.  Duke is 16-5, which is a bad record for them, and it seems that the players are more focused on problems with Allen than they are with playing.

“I think Allen needs to be suspended, something needs to be done.  The NCAA cannot let this happen.  Allen is also affecting his team with all of these problems he causes.  He is dragging Duke down,” said freshman Brett Wood.

As we are more than halfway through the season, people are wondering if Duke can turn this bad season into a positive one, and does it have to start with disciplining their “leader” Grayson Allen?