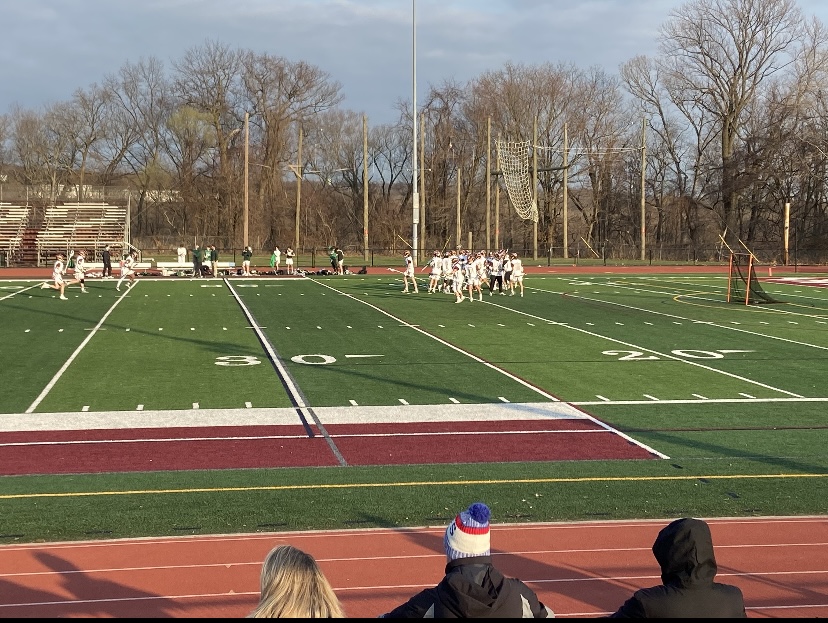 The first game of the much anticipated Wayne Hills Boys Lacrosse season was on Wednesday, March 30, 2022, against a talented Pascack Valley team. When they matched up against each other last year, Pascack took home the win, 9-4.

It was no surprise that sophomore, Nate Lewis, came out on top of all stat sheets. He put in 5 goals of his own along with 7 total points in the victory over Hills last year. With him being a more experienced junior this year, he was definitely a player to watch out for in this year’s opener for the Patriots.

The first quarter started with both teams scoring quickly. They came out firing, each scoring two goals of their own. The second quarter was hills-dominated as the Patriots came out and scored three more of their own, putting them up 5-2. Pascack answered in the third, putting up their own three goals, but the Patriots held on, scoring one more to put themselves back up by one, 6-5. It all came down to the fourth quarter where, in dramatic fashion, Hills pulled through matching the two goals scored by Pascack, leading to the 8-7 win for the Patriots.

Captains, Ben Contella and Ricky Iapoce combined for five out of the eight goals scored. Senior, Logan McFadden put in two more, and sophomore, Dom Cataline included one of his own. However, the focus isn’t all on the offense, the Patriot defense put up a great stop to stop a talented Pascack Valley team. Senior goalie, Jack Dates saved four shots at net, and senior captain, Mario Ianelli, a defenseman for Hills had a great game of his own.

When asked about his opinion of how the Hills team played overall, Ianelli had this to say, “[We] had our ups and downs throughout the game. But, one thing that we never lost was our heart. It was an overall great win and [I] can’t be more proud. Great feeling to start 1-0.” He followed up by saying, “This win means everything. To start off hot and set high expectations for us.”

The Patriots have proven to be a very skilled team and a force to reckon with on the field. This was a promising win for this Hills team and there are high hopes for the future of this team.