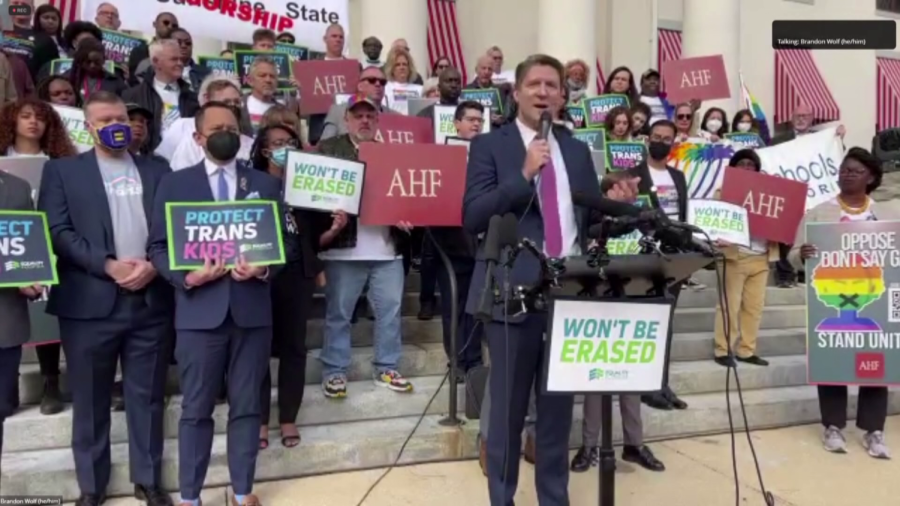 On Thursday, February 24, Florida House Republicans passed Bill HB1557, dubbed the “Don’t Say Gay” Bill. This bill prohibits any “classroom discussion about sexual orientation or gender identity in primary grade levels or in a manner that is not age-appropriate or developmentally appropriate for students.” The bill passed the House by a vote of 69-47.

There are no clarifications on what is “appropriate,” which is one of the biggest concerns about the bill. With such loose classifications, eventually all LGBTQ+ discourse could be banned from classroom settings. This further stigmatizes members of the LGBTQ+ community. For many students, classrooms are the safest place to be educated on these issues. Erasing discourse does not erase the existence of LGBTQ+ people–it cruely stops schools from being a safe space for members of the community.

If this bill is passed, it would allow parents to successfully sue teachers or the school if there was any discussion they deemed “inappropriate.” This includes sex education for LGBTQ+ youth.

This bill has come under heavy criticism by many LGBTQ+ advocates. Recently, it has even been rejected by President Joe Biden, who tweeted his criticisms on February 8th.

“I want every member of the LGBTQI+ community– especially the kids who will be impacted by this hateful bill– to know that you are loved and accepted just as you are,” he tweeted.

In addition to the “Don’t Say Gay” bill in Florida, fifteen other bills are under consideration in eight states that would limit speech about LGBTQ identities in classrooms.

“If bills like this are passed, what is that going to show to younger kids? By not teaching children the prejudice that the LGBTQIA+ received, then history will continue to repeat itself,” said Irene Hwang, a junior at Hills.

“This bill hinders the development of the already difficult process of queer youth discovering and coming to terms with their sexuality. When we’re censoring and stopping these conversations on a larger scale, it speaks volumes. Removing these conversations will only imply there should be shame,” said sophomore Anzor Mustafa.

According to GLSEN’s National School Climate Survey, LGBTQ students in schools with a LGBTQ-inclusive curriculum — compared to their counterparts in schools without that curriculum — were “less likely to feel unsafe because of their sexual orientation (41.8% vs. 63.3%) and gender expression (34.6% vs. 47%).” Studies show that members of the LGBTQ+ community were twice or more as likely to report that they had experienced bullying or harassment and were in fear of physical violence.

Many people wonder about the implications of such a bill progressing this far already, and they worry about the future of LGBTQ+ students in school environments.

As the bill is going through the Senate, there continues to be protest and opposition against its progress.