Is Hills Too Cold? 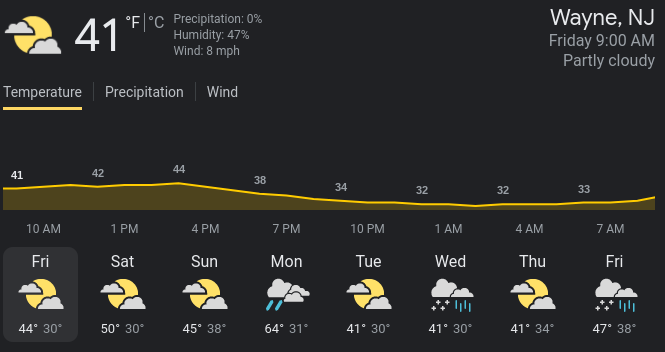 The temperatures and weather for the upcoming weekend, as well as beginning of the week.

As it gets colder outside, it can also get cold inside of Wayne Hills. Some rooms are heated, and some not.

The Winter months and holiday season is approaching rapidly with temperatures dropping to very cold temperatures. The temperature on most days can almost never reach above 50 degrees, and in the morning and night, can drop below 30 degrees sometimes. This temperature change has also affected the students and possibly staff of Wayne Hills. Even though it is this cold, some teachers insist on keeping windows open. There is a wide range of different temperatures throughout the school.

For example, freshman Prisma Vaughn had to say, “It’s usually cold because the teachers leave the window open. As long as they shut the windows, it’s a perfects temperature.”

In the writers own opinion, some rooms such as the biology rooms and Ms. Schillaci’s room can be very cold in the mornings. It gets even colder if they choose to open the windows.

Because of all this temperature change, it could also alter the clothing that students have to wear in class, and that might change depending on what class they are in at that time. Another freshman at Hills, Timothy Torubaruv adds, “The temperature in the school isn’t terrible, but there are certain sections which can often be much colder or hotter than the rest of the building making it uncomfortable at times. Especially with the winter season coming i’ts difficult to really get comfortable in your clothing when every room has a different temperature and when you want wear a sweatshirt in one room, you’ll have to experience an uncomfortable temperature in the next room.”

Hopefully as winter continues, we get closer to spring, and these arbitrary temperatures can come to an end.Make sure to bring a jacket to school, just in case.