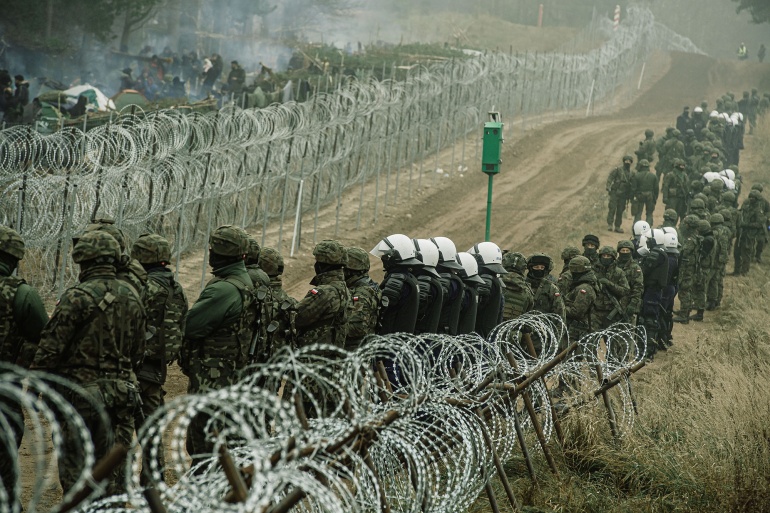 Since early November refugees from the Middle East have piled up in “no man’s land” between Poland and Belarus. Migrants’ hopes of entering Europe through Belarus and traveling west have been shut down as Poland has denied entry to refugees. Instead, the refugees are met with barbed wire and a large military presence. With frigid weather and a lack of supplies and medical care, aid workers, lawyers, and journalists have been denied access to the border.

But how did this disaster start? The answers to that question goes all the way back to August of 2020. After the Belarusian President, Alexander Lukashenko, was controversially elected for his sixth term, Belarusians charged through the streets demanding a legitimate election. The European Union and the U.S. responded to the election by placing sanctions on Belarus. Furious, Lukashenko and Minsk, the capital of Belarus, announced that Belarus would not prevent undocumented refugees from reaching EU countries, claiming that the sanctions had deprived Belarus of the funds to prevent migration. The situation escalated in June, when Lukashenko ordered Ryan Air flight 4978 to land in Belarus, claiming that there was a bomb threat, coincidently that flight carried activist journalist, Roman Protasveich, who was arrested once the plane landed. This act of authoritarianism was met with more sanctions from the EU.

Since then the EU and Belarus have been throwing accusations back and forth. Lukashenko claims that the EU is violating human rights by denying article 14 of the Universal Declaration of Human Rights which states that “Everyone has the right to seek and to enjoy in other countries asylum from persecution”. The EU has hit back claiming that Belarus is just using refugees as its weapon.  Additionally, the EU also charged Belarus’s national airline, Belavia, of trafficking immigrants, a claim that Belavia strictly denies. Wayne Hills Junior, Ricardo Montanez, believes that “if Lukashenko really cared about the immigrants he would grant more refugees asylum”, with Belarus having some of the lowest rates of asylum in Europe.

However, Lukashenko continues to accuse the EU of violating human rights. On November 26, Lukashenko made an appearance at the border building support from the migrants by announcing that “If you want to go westwards, we won’t detain you, choke you, beat you, it’s up to you. Go through. Go.” Reports from the New York Times suggest that migrants have been supplied with wire cutters by Belarus. Belarus has also threatened to cut off a Russian gas pipeline that runs through Belarus, which would severely hurt the EU which is already dealing with an energy shortage.

Questions have also risen about Russia’s role in the crisis with Poland accusing the Kremlin of engineering the crisis, as Russia is Belarus’ biggest trade partner and political friend.  Putin had come out saying Russia has “absolutely nothing to do with” the border crisis, but many remain skeptical. U.S. Secretary of State Antony Blinken expressed his concern about Russia’s excessive military activity fearing that it could lead to another invasion of Ukraine and a broader goal of undermining the EU and America.

Though many of the news headlines will express concern about Belarus and Russia conspiring together to undermine the West, the real people who are being affected are the refugees stuck with limited supplies in the harsh weather.