The Patriot Press • May 26, 2021 • https://whhspatriotpress.com/21359/news/international-news/debris-from-chinese-rocket-lands-in-indian-ocean/ 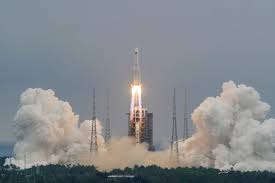 China has just successfully landed its first rover on Mars. ‘Zhurong’ had been circling the planet for three months before beginning to plunge towards the surface on May 14. Being only the second nation to do so, this is a very important step for China. However, as the remains of the rocket hurdled back to Earth, some debris “survived” the crash through the atmosphere and landed just west of the Maldives on Sunday, May 16.

Although China had insisted that the risk of potential casualties was low, the landing point of the debris was unknown. US Defense Secretary Lloyd Austin criticized the uncontrolled return of the rocket, saying that is it up to “spacefaring nations [to] minimize the risks to people and property on Earth.” He also says that China is failing to meet the standards regarding space debris.

As word spread about the mystery landing and fear for safety became a factor in the matter, people wondered, where will it land? On Sunday, May 14, pieces of the nearly 23-ton rocket booster crashed into the Indian Ocean. Thankfully, there were no injuries, but the event has shown the potential risks and dangers stemming from humanity’s presence in space. Hanspeter Schaub, a professor, and engineer said in an interview that “this debris may increasingly threaten the safety of satellites and human astronauts in orbit.” Even a piece “the size of an inch,” he explains, “at those speeds. . .will just kill your satellites.”

Before the location of the landing was determined, Tiktok and other social media platforms were booming with possible theories (some supported and others not). Sophomore Emily Nolan explained that she felt “scared because there was such a wide range of places that it could have landed, but no one truly knew where that was until just hours beforehand.”

As more and more countries continue to launch rockets into space, the risk of collisions is “like playing the lottery” says Don Pollacco, a physics professor at England’s University of Warwick. However, the chance of hurting people is low, and as critics continue to comment on China’s failings, hopefully, other nations will work to avoid the same turnout.