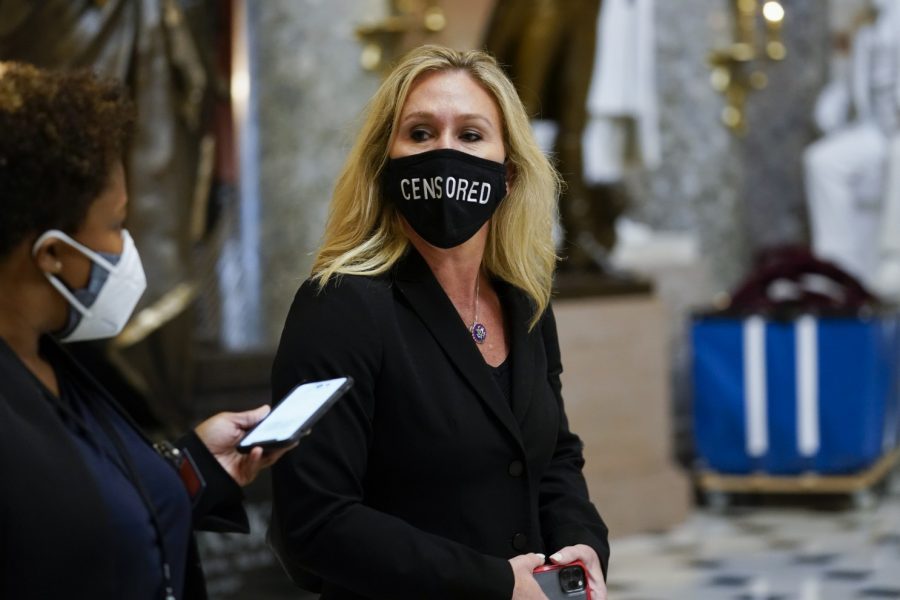 Majorie Taylor Greene serves as U.S. Congresswoman for Georgia’s 14th District. Her candidacy for the House in 2020 made several headlines and provoked national uproar. After all, it is the first time a conspiracy theorist has been elected into the federal government.

First and foremost, Greene is a former QANON sympathizer and believer. In 2018, while she was talking to her followers on a live stream, she offered her support for the movement. “It’s an anonymous person… ‘Q’ is a patriot. We know that for sure… There’s possible Satanic worship and maybe that all the scary things that people talk about on what’s considered conspiracy sites really may be true.” QANON is an alt-right conspiracy group that believes our world is run by a powerful and elite cabal that worships Satan.

Like ‘Q’, she also believed that a plane had never hit the Pentagon during 9/11. “The so-called plane that crashed into the Pentagon. It’s odd. There’s never any evidence shown for a plane in the Pentagon,” she explained on another live stream. However, there has been evidence of the attack on the Pentagon which should never have been called into question from the beginning.

As if that was not enough, she has spread abhorrent conspiracy theories on mass shootings. “How do you get avid gun owners and people that support the Second Amendment to give up their guns and go along with anti-gun legislation? Maybe you accomplish that by performing a mass shooting into a crowd that is very likely to be conservative…  is that what happened in Las Vegas? Is that why the country music festival was targeted?” It is clear Greene is an avid gun owner herself, stated very clearly in her campaign ad: “I’m running to stop gun-control,” she says while firing a gun at various targets. Although she has the freedom to exercise her Second Amendment, her horrendous remarks on mass shootings should not be allowed. Our government should have no place for such atrocious beliefs.

Here’s everything else that Greene once promoted on her various social media accounts: Obama is a Muslim, the Clintons were responsible for the death of JFK Jr., a space laser owned by a powerful Jewish family was responsible for the California wildfires, and Nancy Pelosi should be executed. Although it should not have to be stated, these “beliefs” do not hold an ounce of truth.

As her name once again appeared on the headlines, a video re-surfaced of her attacking Parkland school shooting survivor David Hogg. David, a co-founder of March For Our Lives, has been actively calling for gun-control legislation ever since the Stoneman Douglas shooting in 2018. In the video, Greene is following Hogg to the Capitol while calling him a “coward.” Fred Guttenberg, whose daughter was among the 17 killed during the shooting, tweeted the video expressing his rage. “@mtgreenee, is this you harassing @davidhogg 111 weeks after the Parkland shooting, that my daughter was killed in & he was in? Calling him a coward for ignoring your insanity.  I will answer all of your questions in person. Get ready to record again.” A forty-year-old woman  attacked an innocent teenager who survived a horrific event in his life. Rather than offering her condolences and sympathy, Greene accused Hogg of “trying to take [her] guns away.” When asked by a reporter if she feels “sorry” her remarks, she said was “not sorry” for speaking with David Hogg about gun rights, justifying her behavior by saying that “he was an adult when I spoke to him.” The irony of her disbelief in school shootings is that Greene sits on the Education Committee in the House.

As her past slowly began unraveling, Greene apologized to her GOP colleagues in a private meeting where she denounced her past remarks. She now believes that school shootings are very real and does not believe in QANON conspiracy theories. “These were words of the past. These things do not represent me,” she said. The GOP awarded her with a standing ovation.

However, on February 4th, the Democratic-controlled House of Representatives stripped Greene of her committee posts. This came after GOP leaders failed to hold Greene accountable by only merely suggesting reassigning her to another committee. Eleven Republicans joined all of the Democrats in voting to remove Greene from her committee assignments. Representative Chris Smith of New Jersey was among the eleven.

Surprisingly, Senate Minority Leader Mitch McConnell joined Democrats in condemning her actions. “Somebody who’s suggested that perhaps no airplane hit the Pentagon on 9/11, that horrifying school shootings were pre-staged, and that the Clintons crashed JFK Jr.’s airplane is not living in reality,” he said. However, just like House Minority Leader Kevin McCarthy, he failed to take any action.

Junior Jenine Alsouqi agrees with the decision to remove Greene from her committee assignments. “I think it was a good idea to strip Greene of her seat. It’s one thing to be opinionated and lean in a certain direction, but I believe that the line is drawn when opinions turn into supporting conspiracies and dangerous ideas,” she said. “It seems to me that Greene is only looking to further divide a nation that is in desperate need of unification.”

Senior Skyler Sieradsky shared similar ideas. “I think that spreading conspriacy theories incites fear and unjust hatred among people, and her saying those things is deplorable. However, I think it speaks volumes that despite her saying these things, she was still voted into office,” she shared. “Personally, I would not vote for someone who could say such allegations, and her being in office puts a stain on our great country.”