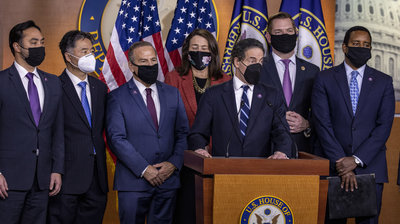 Statement by the POTUS: “This sad chapter in our history has reminded us that democracy is fragile. That it must always be defended. That we must be ever vigilant. That violence and extremism has no place in America. And that each of us has a duty and responsibility as Americans, and especially as leaders, to defend the truth and to defeat the lies.

Stated by President Joe Biden, the attack on the capitol was a reminder that even our great democracy that was founded and established in 1776 can crumble and fall. It is even more unfathomable that the fall of our democracy was directly related to its own former President Donald J. Trump. However, a democracy is powered by the will of the people and is resilient in times of chaos. Trump was put to trial for his actions at his second impeachment.

Starting in January, the House of Representatives voted for the impeachment of Trump and adopted the article “incitement to insurrection” with a vote of 232 to 197. One of the highlights was that 10 Republicans denounced Trump’s actions and added to the 232 winning vote. On the contrary, Trump’s impeachment in 2019 did not receive any support from GOP representatives.

The article was then transferred to the Senate and the official trial began on February 9th. First, there was a four-hour debate by the House managers and Trump attorneys to decide whether Trump is subject to the charges of impeachment when he is no longer holding office. This was a result of Republican Rand Paul’s efforts to stop the impeachment from proceeding because Paul had deemed it unconstitutional. Nevertheless, the Senate deducted that it was permissible with a vote of 56-44. It was at this point where the voting solidified the expected outcome of Trump’s impeachment and revealed what Republican Senators would decide.

From February 10th to 12th, each side of the debate was given sixteen hours to present their argument and case.

The House Impeachment Managers had taken up most of their time with only four hours left. The prosecution presented a formidable case, utilizing both facts and emotions. Managers stressed that Donald Trump’s words clearly were used in a manner to “inspire” his supporters to start a riot at the Capitol. They brought up interviews of Trump supporters who believed that his exact words detailed a call to attack the sacred building: to “stop the steal.” They also used videos and audio of the insurrection to stir up emotions and remind Senators of the horrid and infamous day. They also prepared a rebuttal to the argument that Trump was simply exercising his First Amendment rights. Representative Joe Neguse argued that the circumstances are different for a former POTUS; ” “President Trump wasn’t just some guy with political opinions who showed up at a rally on Jan. 6 and delivered controversial remarks. He was the president of the United States. And he had spent months using the unique power of that office, of his bully pulpit, to spread that big lie that the election had been stolen to convince his followers to ‘stop the steal.’” They concluded their argument on that Thursday.

The defense, on the contrary, provided an argument that lasted less than four hours on Friday. One key point of their argument was that the speed of the trial did not adhere to due process and was too rushed; they failed to remember both parties agreed to the trial rules and schedule. Trump’s legal defense team also asserted that Trump’s words at the rally on the day of Biden’s certification were protected by the First Amendment. To further this point, they also showed Democratic politicians using the same words that Donald Trump is being attacked for. Videos of Joe Biden, Kamala Harris, and Nancy Pelosi using the word “fight” were shown. And taking everything into account, the defense stated that the impeachment of Trump stemmed from the hatred and resentment Democrats felt towards the former president. In their conclusions, they referred to his trial “an act of political vengeance” and “a politically motivated witch hunt.” Their argument ended on that Friday.

Senators were also given time to share their questions and concerns with the debate presented to them. They had four hours on Friday to ask questions to the House Impeachment Mangers as well as Trump’s legal team. On Saturday morning, both teams concluded and summarized their arguments. The Senate voted and Trump was unsurprisingly acquitted with a vote of 57-43, only 10 votes short from being convicted and meeting the 2/3 requirement. The vote, furthermore, was the most bipartisan impeachment that has happened in America as 7 Republican Senators crossed party lines.

Although the prosecution lost, they nonetheless were still satisfied in their argument and decisions. “We left it totally out there on the floor of the U.S. Senate, and every senator knew exactly what happened,” said Impeachment Manager Jamie Raskin. They brought the truth to light but it ultimately was the Senators’ decision whether to face the facts or turn a blind eye.

“What the House managers needed wasn’t more witnesses or more evidence, what we all needed was more Republican courage. This was the most bipartisan verdict in American history, a strong rebuke to President Trump, but frankly at the end of the day, the trial had reached its natural conclusion,” said Democratic Senator Chris Coons.

Sophia Kim,  a sophomore at Hills, expressed her frustrations at the outcome. “It is kind of disappointing to see that the freedom of speech is used to defend such actions. During history, our presidents have practiced a tradition of peacefully transferring power, and Mr. Trump did not do so. He encouraged a riot on federal buildings, and this is not okay for a President to do,” she said. “Whether you are a Democrat or Republican, you are an American. As Americans, we should stick to principles and the wise precedents set by previous presidents in the past— these traditions have been working all this time, so there’s no reason for us to break them.”