Day One: The Biden Administration 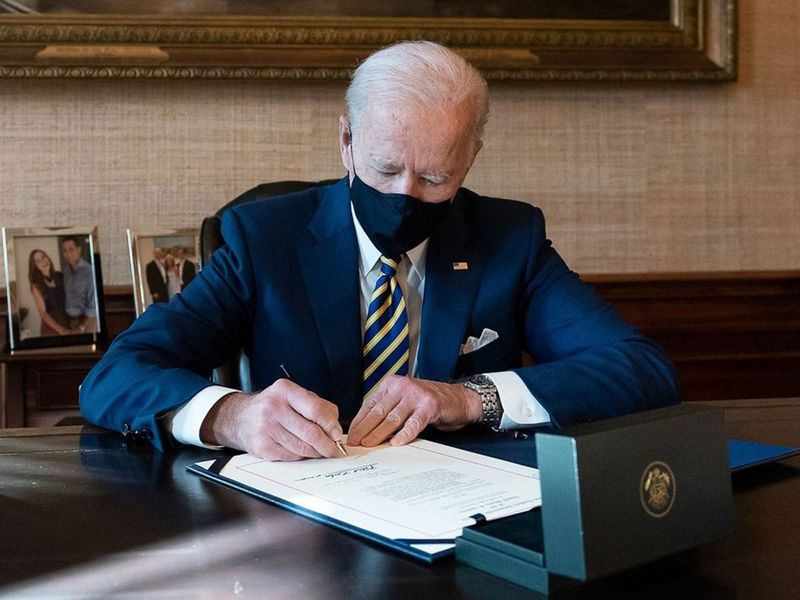 On January 20th, 2020, Joe Biden was inaugurated as the 46th President of the United States. It has been a little over three weeks since his inauguration. However, there is still an alarming number of people who do not realize how much the President did on his first day in office.

In the first 24 hours of his Presidency, Biden commanded 17 executive orders and a range of new domestic and international policies, all of which were announced before the nightly Inauguration day festivities.

“Work within the West Wing continued late into the night and early in the morning as Mr. Biden’s staff sought to have the new policy priorities immediately implemented, from a mask mandate requiring those on federal grounds observe the coronavirus safety measure to the overturning of former President Donald Trump’s legacy,” says Chris Riotta of The Independent.

Some of the most notable actions of the Biden Administration on that day include, according to The Independent:

Rejoining the World Health Organization and announcing that Dr. Anthony Fauci would serve as the US delegation head. The World Health Organization is a specialized agency of the United Nations responsible for international public health. The United States left the WHO in 2020, under the orders of the  Trump administration.
Ended the previous administration’s travel restrictions on several Muslim majority countries, which has been criticized by many as xenophobic and against American values. Instead of a ban, the White House says it will improve visitors’ screening by strengthening information sharing with foreign governments and other measures.
Swore in nearly 1,000 new administration appointees via Zoom.
Canceled permits for the Keystone XL oil pipeline that would disrupt South Dakotan Native American tribes.
Created a new presidential appointee role, the COVID-19 Response Coordinator, to assist with national vaccine distribution efforts.
Launched the “100 Days Mask Challenge,” including an executive order mandating mask-wearing on federal grounds and encouraging Americans to wear masks for 100 days. This is one part of Biden’s Covid relief plan.
Extended the nationwide eviction and foreclosure moratorium until at least the end of March. Public-health officials have warned that evictions could lead to people living in more crowded settings, including shelters, which has been proven to hasten the coronavirus’s spread.
Strengthened the Deferred Action for Childhood Arrivals program via executive order. Deferred Action for Childhood Arrivals is an exercise of prosecutorial, providing temporary relief from deportation (deferred action) and work authorization to certain young undocumented immigrants.
Avril Haines confirmed as the first woman to lead USIC as the new director of national intelligence.
Rescinded the 1776 Commission, created under the Trump administration, to help reshape how public schools teach the history of slavery. The policy has been said to have had racist undertones and hidden the United States’ real history.
Rejoined the Paris Climate Accord via executive order. This agreement aims to reduce the emission of gases that contribute to global warming.
Paused student loan payments and the accruing of interest on all federal student loans until the end of September. This would mean that, “No federal student loan payments are owed, no new interest will accrue on your federal student loans and, no student loans in default will be collected.”
Halted the construction of new border security installations along the US-Mexico border, creating an inviting message to immigrants. He also ended the Trump administration’s Migrant Protection Protocols Policy, otherwise known as the Remain in Mexico policy.
Announced new executive orders for school and business reopening plans. The president’s plan to reopen schools includes ramping up testing, accelerating vaccinations’ pace, and providing more funding for educational institutions.
Ordered the inclusion of non-US citizens in the Census, allowing for a more accurate representation of the nation’s population.
Signed executive order preventing workplace discrimination based on gender identity or sexual orientation. Although the original document is non-specific, it will open new paths to ensuring equality in the workplace.
Extended work authorizations and deportation deferrals for select immigrants until at least June 2022, allowing those affected to have more time to ensure a peaceful migration.
Created plans to overturn key Trump administration abortion policy restricting funding for overseas abortion providers.
Placed a moratorium on oil and gas leasing in the Arctic National Wildlife Refuge
Established an interagency group on the impact of carbon pollution and asked the Environmental Protection Agency to reconsider methane regulations immediately.
Announced intention to revoke the transgender military ban. On January 25th, this ban was officially canceled, allowing another step forward in trans rights.
Designated Domestic Policy Council Susan Rice to lead the effort towards “rooting out systemic racism” in federal agencies.
Restructured immigration arrest priorities for ICE. While ICE’s new plans are not yet final, temporary instructions point to a major shift in enforcement. Agents will no longer seek to deport immigrants for crimes such as driving under the influence and assault and will focus instead on national security threats, recent border crossers, and people completing prison and jail terms for felony convictions.
Re-examined federal funding to ensure equitable distribution in communities of color and low-income areas. This could potentially lead to the lifting out of poverty for millions of low-income Americans.
Directed agencies to “consider revising vehicle fuel economy and emissions standards.”
Paused all last-minute actions taken by the previous administration.

After taking a look at some of the President’s work, sophomore Siddhi Jadhav says, “I think what Biden is doing is great! He is really taking a big step forward and helping out in many ways. He is trying his best to ensure covid goes down, that we care about Earth, and trying to set equal rights and laws. At a time of unrest like today, this is definitely what we need.”