Trump is Neither Conceding nor Cooperating 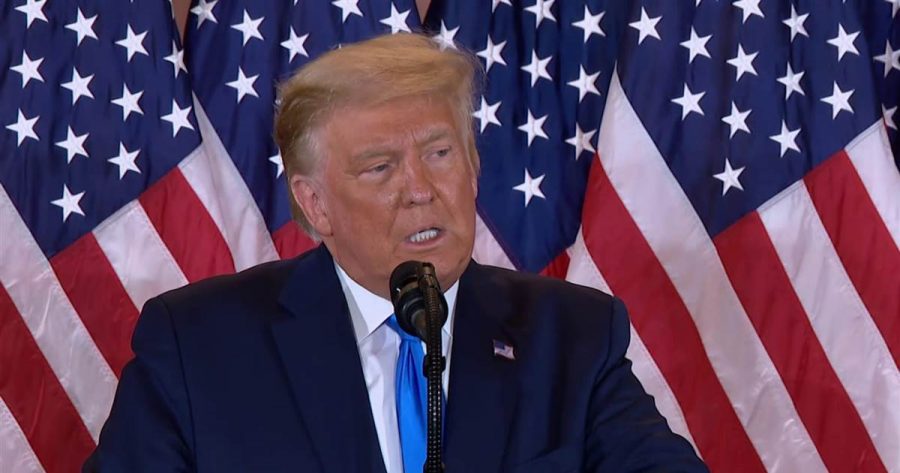 By Wajiha Rizvi and Trisha Vyas

Former Vice President Joseph R. Biden was elected as the 46th President of the United States, beating President Donald J. Trump in the electoral college by 306-243 and by more than five million popular votes.

The 2020 election was an incredible and historic moment for our entire nation, with the first female vice president, Kamala Harris, a woman of both African and Asian descent. This election was also the first to occur during a global pandemic, allowing for the usage of mail-in ballots and inadvertently leading to the largest number of votes ever recorded in American History.

Times like these deserve recognition, especially during this era of confusion known as 2020. However, the American people have yet to see an official public statement from the President acknowledging these results.

What the American people have received are a series of statements from the President on his Twitter page (@realDonaldTrump) that imply anything but a concession.

On November 7th, 2020, after election results had been finalized, President Trump falsely stated: “I WON THIS ELECTION, BY A LOT!”

In the next couple of days, President Trump sent out a series of tweets that imply either that the election results were “rigged” by Democrats, or the polling devices in several states were inaccurate and that votes needed to be recounted. These tweets continued well after finalizing the election results and continued as of November 13th, 2020.

The President has taken his statements towards legal action, as Alana Abramson of  TIME tells us that, “In the past week alone, the Trump campaign blitzed state and federal courts with roughly a dozen new lawsuits, most attempting to halt the vote-counting process or disqualify tranches of ballots.”

What is important to note, as said by Eric Tucker of TIME,

“A coalition of federal and state officials said Thursday that they have no evidence that votes were compromised or altered in last week’s presidential election, rejecting unsubstantiated claims of widespread fraud advanced by President Donald Trump and many of his supporters.” He continues to say that, “The statement, by government and industry officials who coordinate election cybersecurity, trumpeted the Nov. 3 election as the most secure in American history. It amounted to the most direct repudiation to date of Trump’s efforts to undermine the contest’s integrity. It echoed repeated assertions by election experts and state officials over the last week that the election unfolded smoothly without broad irregularities.”

President Trump has a right to ensure that the election results were accurate; however, as there is no evidence of election fraud, he must accept the conclusion despite it not working in his favor. He must also recognize that every vote in this country represents someone whose voice deserves to be heard. Regardless of the effect it brings on the election results, every vote must be counted.

It is also important to note that “Trump’s [own] wife, Melania, and son-in-law, Jared Kushner, have been urging the president to think seriously about an exit strategy…,” as said by Gabby Orr of Politico. This only intensifies the need for President Trump to concede as, before the election, these two figures were some of the most active supporters of the Trump campaign.

President Trump’s silence and refusal to concede leaves a hole of confusion in the hearts of the American people. Although President Trump will not be returning for a second term in 2021, he is still the President of the United States, making it essential for him to address the end of his Presidency publicly. It is a tradition among past US presidents to deliver concession speeches, allowing for finalization and widespread acceptance of election results and creating a sense of unity among the nation. These speeches are usually given within a week after election results. However, Trump has taken every action since November 7th to show his intent to break this century-long tradition.

“I think that it is incredibly unprofessional that President Trump still refuses to concede, and it is making the transition process a lot more difficult than it has to be,” says Wayne Hills sophomore Eunice Chi. “It is ridiculous that Trump and the majority of Republicans will not accept the results, but will accept the senate results that came out as majorly republican although they used the same voting system… [If he does not concede,] years from now, he will be remembered as a stubborn president who spent his last few months in office in denial and bitterness. Most major foreign leaders have already acknowledged and sent congratulations to Joe Biden and Kamala Harris.”

Chi concludes with the statement, “The world is moving on without President Trump. He needs to face his loss like an actual leader.”

On the other end of the spectrum, another sophomore from Wayne Hills, Sahil Mehta, gives his opinion on why Donald Trump should not cooperate and accept the fact that Joe Biden is the President-elect. He says, “I don’t think he should concede because there is no honor in that, and I believe he should fight to the end. Although I also believe the election is essentially over and Biden has probably won.”

If the claims made by many Republicans, including President Trump, that many of the votes from the swing states of especially Georgia and Pennsylvania are all deemed false,  it does not matter if President Trump admits to that fact or not.

During the past several days since the election, President Trump has filed numerous lawsuits challenging results in key battleground states, all of which have been rejected by the courts.  He has fired several key Pentagon and Department of Homeland Security personnel and refused to cooperate with the time-honored transitional process that outgoing administrations take part in.