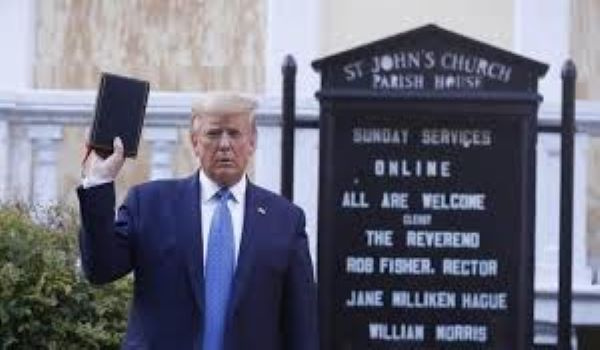 Although the President remained relatively silent in the wake of the death of George Floyd at the hands of a Minneapolis police officer and the ensuing protests across the country, on June 1st, he gave one of his most unifying and inspiring speeches from the Rose Garden. He opened up his speech not with verbally attacking the violent rioters and looters terrorizing the streets, but with a refresher of what his job is. “…my first and highest duty as President is to defend the great country and the American people. I swore an oath to uphold the laws of our nation, and that is exactly what I will do”

The President then condemned the evil attacks that occurred against George Floyd and made a promise to the American People that his administration “is fully committed that for George and his family, justice will be served. He will not have died in vain.”

As every American mourns the death of Mr.Floyd, the President’s promise for justice provides reassurance during these troubling times.

Following his speech, the President went on to threaten anyone who is looting and using violence. He labeled them as “terrorists” and promised to defend anyone who is being harmed by rioters. If local and state authorities cannot “dominate the streets” the President promised to use military force (a constitutionally permitted measure). He swore to uphold “law and order” which is just what the country needs right now.

After this, in an astonishing and symbolic fashion, the President walked across Lafayette Park to St. John’s Episcopal Church. St. John’s was lit on fire by the rioters the night before. It was also the church that at which Abraham Lincoln (the president who freed the slaves) prayed.  Here, he held up a bible flanked by several of his White House staffers.

In 2016, the American people chose Donald J. Trump to take charge of the country for the next four years. He was able to beat 16 other Republican candidates, constant media slander and Hillary Clinton to become president. He was viewed as the “law and order” candidate that will honor and respect the rule of law, unlike the past few presidents,  a title he has lived up to.

Americans want law and order, not chaos and anarchy, which is exactly why Donald Trump won the 2016 election. His “divisive nature” is a product of liberal-media bias that has no factual basis.

President Trump is calling for unity and strength during a time of mourning and division. Unfortunately, this is not likely a message the mainstream media will not convey.