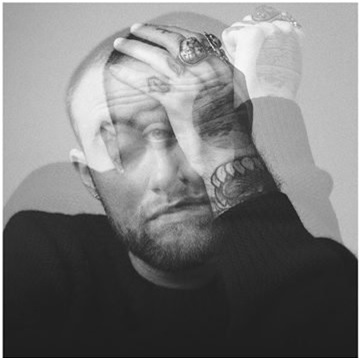 The family of the late rapper Mac Miller has announced they are releasing a new album of his final recordings titled Circles on January 17.

The 26-year-old musician was in the midst of recording his companion album to Swimming before his untimely death in 2018.

According to his family’s statement posted on the artist’s Instagram page, Miller was “well into the process of recording his companion album to Swimming, entitled Circles. Two different styles complementing each other, completing a circle–Swimming in Circles was the concept.”

“This is a complicated process that has no right answer. No clear path,” the family wrote. “We simply know that it was important to Malcolm for the world to hear it.” 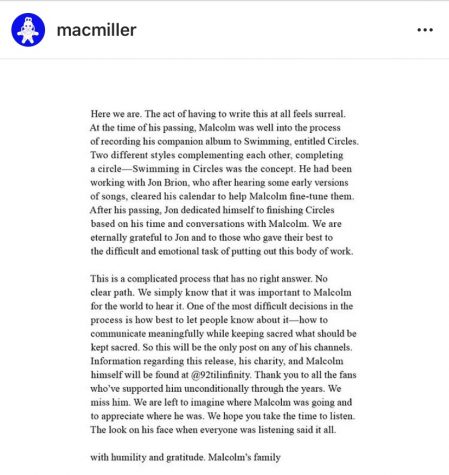 Producer Jon Brion has been working with Miller on Circles, according to the family’s statement, and after Miller’s death, he dedicated himself to completing the album.

“We are left to imagine where Malcolm was going and to appreciate where he was,” the statement reads. “We hope you take the time to listen. The look on his face when everyone was listening said it all.”

Before his accidental overdose, Miller’s released his fifth studio album Swimming, which debuted at No. 3 on the Billboard 200 chart. The album was well-received by critics, and Rolling Stone referred to it as “the most impactful album of his career.” Swimming went on to receive a Grammy nomination for best rap album.

Miller had built an extremely loyal fan base since before his 2011 debut “Blue Slide Park,” which was named after a playground in his neighborhood in Pittsburgh. Miller’s fans held a vigil 3 days after his death and came together again a year later to celebrate and remember his legacy.

Numerous musicians have also paid tribute to the late rapper, including Ariana Grande, who dated Miller for almost 2 years, Thundercat, John Mayer, and Kid Cudi. Kevin Abstract, the rapper who cofounded “Brockhampton,” stated that he had been inspired by Miller after attending one of his concerts in 2010. John Mayer performed at the Mac Miller Tribute Concert, along with Lil Wayne, Chance the Rapper, Travis Scott, Anderson Paak, among others.

On Friday, the family released the single “Good News” off the album, which has already become a fan favorite, according to the vote of Friday’s Billboard poll.

Pop-up fan listening events have also been announced in a number of cities, including New York, Sydney, and Miller’s native city Pittsburgh. Fans are invited to “experience Circles via an immersive multimedia exhibition” where entry to the events are free and any profits fro merchandise sales will go to the Mac Miller fund.