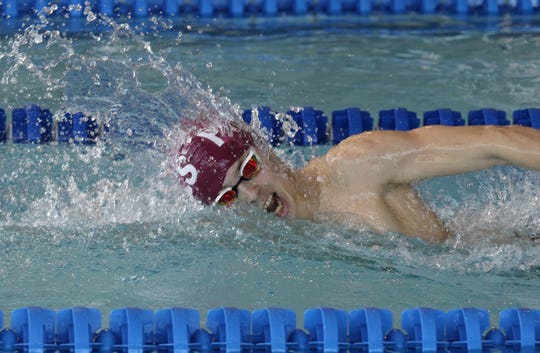 By Afi Ibragimov and Lily Waterman

The team competed against several others including Wayne Valley, PCTI, Lakeland/West Milford, Clifton, DePaul, and Passaic. Overall the girls’ team placed third, just after PCTI in first, and Valley in second. And the boys placed third as well, also after PCTI and Valley.

There were great improvements during this year’s counties, including various new personal records and some swimmers coming extremely close to breaking Wayne Hills’ previous records.

Aaron Khodarkovsky, a senior on the boys’ team, placed first in the 200 and 500-yard freestyle races. Khodorkovsky also broke his own school record in the 500 free a time of 4:53.

Other boys, including juniors John Szczepanski, Marcel Kolano, Noah Kaplan and seniors Jimmy He and Robert Stepien also ranked in the top six of their events.

“Of course I’m disappointed that we didn’t win, but we swam many personal bests and the effort was rock solid. Hopefully, it gives us some good momentum for the latter part of the season,” commented the girls’ coach, Michael Shale.

“It was stressful leading into it but it was fun working together with the team to try to beat Valley and showing up on a Saturday shows how dedicated we are,” said junior Elizabeth Shubaderov, “it’s a moment I’ll never forget.”

Overall, the team came together extremely well and supported each other. With overall third place victories for both genders, it was a phenomenal day filled with improvements and victories.