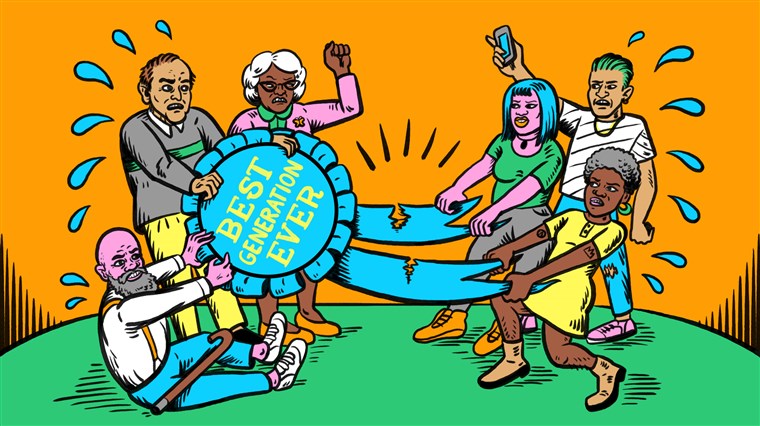 If you are currently on social media such as Instagram or TikTok, you probably heard of the phrase “Ok Boomer.” The term geared towards “baby boomers,”people born between 1944 and 1964, is supposed to mock the older generation for their outdated slang and ways of life. It captures the clash between the two generations and their beliefs and principles.

Although the phrase’s origins are not completely established,  many agree that it came from the exceptionally popular TikTok app. The term spread like wild fire when a viral video made its way onto the main stream within the app. It was of an older man, assumed to be a “baby boomer”, explaining that millenials and Generation Z have what is called Peter Pan syndrome, or the state of not wanting to grow up. A TikTok user then held up a sign that displayed the two single words that has ended friendly relations between the two generations.

Take for example the current climate crisis. Young people all over the world are fighting for their future through protests, strikes, and their words. Using the term “Ok Boomer” in this case would serve the purpose of pointing out the older generations’ dismissive and ignorant behavior of the younger generation’s concerns.

In a viral video, Chlöe Swarbrick, 25-year-old and a lawmaker in New Zealand, used the phrase while giving a speech that supported a climate crisis bill when she was rudely interrupted by an older member of Parliament. In an interview, she stated that the term was an expression of exhaustion. To clarify, exhaustion from being told redundant things such as that the younger generations are “snowflakes” or “entitled” or “lazy.”The term has become so popular that it has been monetized; the slogan is slapped on merch such as sweatshirts, phone cases, hats, and bags.

These supposed “boomers” are perceived as ignorant and headstrong as they refuse to accept change or differing beliefs from their own generation. These issues include such things as discriminative behavior towards the LGBT community, acceptance of the existence of climate crisis, and the threat of rising financial inequality.

However, the phrase equivalent to an eye roll is not the first time society has seen an opposition between two generations. This is seen in the baby boomers’ generation as they protested against the older generations to end the Vietnam war. The majority of the casualties of American soldiers consisted of people born in the 1940’s and as the war dragged on, the boomers came to a point where they felt the need to take action.

Despite all these claims, the term does not characterize all adults born between those years. It’s mostly geared towards the older outdated politicians and figures who are extremely influential to the Millenials’ and Gen-Zers’ future. And essentially, anyone can be a “boomer” regardless of age, as long as they are stubborn to change, reserved, and a conservative.

Daniella Herrera, a sophomore at Wayne Hills, gives her input on the trend. “ I think it’s a dismissive way to end a disagreement without argument that does slightly mock the tendencies of the baby boomer generation,” Herrera comments, “but is not degrading nonetheless.”