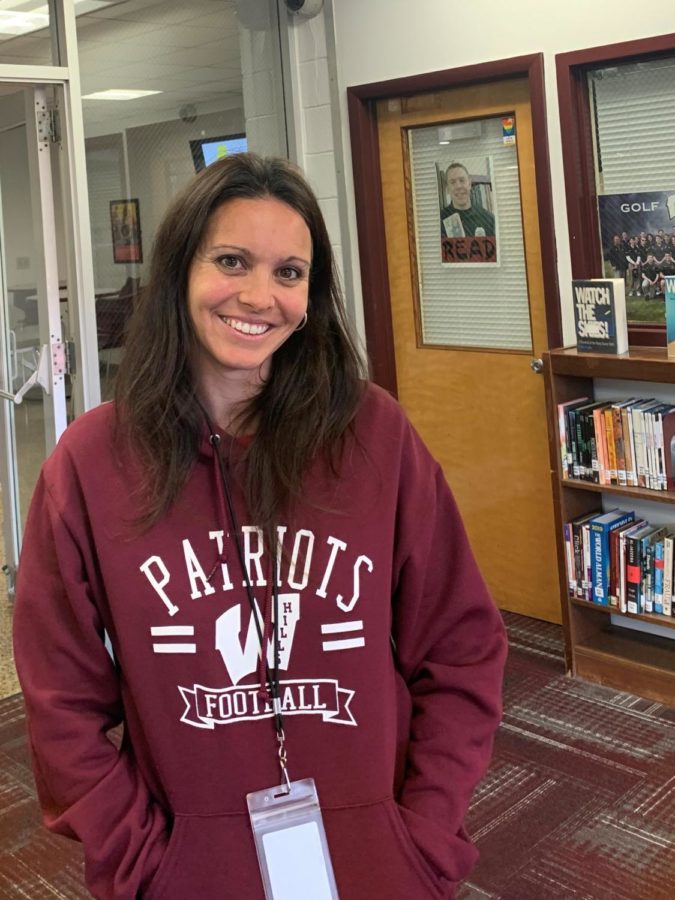 By Michael Joyce and Justin Vorabouth

There’s a new face behind the desk in the Media Center this year as Kristen Caldwell has joined the WHHS team.

The new Hills staff member shares she loves her new role as a media specialist at Hills. She has taught multiple subjects including  English, philosophy, humor writing, and non-fiction writing.

“It’s really fun because I get to know all of the students rather than only knowing the ones in my class,” Caldwell said.

The specialist grew up in Wyckoff attending Ramapo High School, playing soccer for the school’s team and leading them to a championship. Caldwell recalls that her favorite team to play against during her high school days was always Wayne Hills.

After her outstanding high school soccer career, she moved on to play collegiate soccer at The College of New Jersey. At the time, TCNJ was one of the best teams around and, in 1999, Kristen and the rest of the squad made it to the national Final Four.

“I won two National Championships- one with Ramapo High School in 1996, and one with PDA (one of my teammates was Carli Lloyd, who is on the US Women’s National Soccer Team) in 2001,” Caldwell said.

Soccer was and still is a big part of Caldwell’s life as she still coaches at Ridgewood High School.

She has also coached other sports including girls’ and boy’s lacrosse.

Of course, as you would expect, her favorite season is summer. Why? Who doesn’t love going on vacation? Her favorite place to go is Martha’s Vineyard. She has been going there every year since she was six months old.

Her hobbies include watching baseball and soccer. She is a die-hard Yankees fan; She has a newspaper article from the 1964 World Series signed by Mickey Mantle.

“I also attended Game 6 of the 1996 World Series with my dad, and have the tickets and program (all filled out with each play) framed in my living room,” Caldwell added.

In her twenties, Caldwell, believe it or not, was an actress! She performed in many notable shows such as Criminal Minds and Wizards of Waverly Place. She enjoyed being a performer, but as she got older she ended up moving back to New Jersey from California to pursue a different career path.