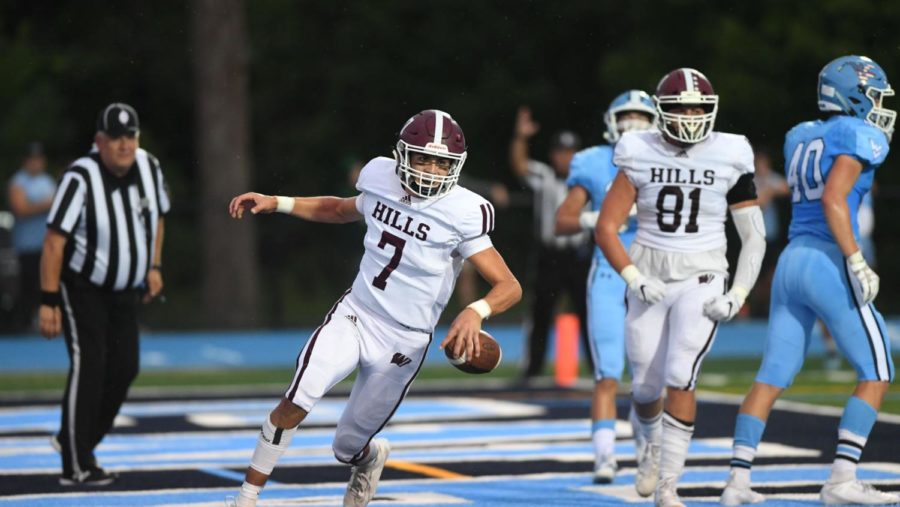 The Patriots were coming of a tough loss 12-0 loss to, Ridge View. The tension was high Saturday night, as Hills looked for their first win of the season, and Valley looked to get their first win against Hills in over 5 years, as well as start 2-0 for the first time since 2016. Guys who stepped up big time for the Patriots include Noah Abida, who ran for 75 yards on 18 carries, Mike Casasanta, who went 10-17 with a touchdown through the air to Steve Masten, as well as adding one on the ground, and Christian Puntillo, who rained in 3 catches for 50 yards, one of which being a one handed catch on his backside at the one yard line after the ball deflected off of the Valley defender. The play received national attention and was actually a Sportscenter Top 10 play, coming in at #5.

The Patriots had a rough start. A 62 yard return by Valley’s, John Testa and then failing to recover the ball after a kickoff by Valley led to a touchdown run by Elijah Lugo. After the bad start, the Patriots’ offense started cooking. Michael Casasanta threw, what seemed to be an uncatchable ball, to Christian Puntolillo who made a spectacular catch with one hand. This gave the Patriots a first and goal. This led to Casasanta’s run-in touchdown, which tied the game 7-7. The patriots scored again in the second quarter. Mike Casasanta passed to a wide open Steve Masten in the endzone. The Patriots were up 14-7 going into the second half. The score did not change in the second half, but we saw some interesting defensive plays. An interception thrown by Mike Casasanta. Then a thrown interception by Tommy Moran, and a incerption for the patriots. The play that would end the Indians chance of winning.

“My favorite part was causing pressure, with Dan Gerald, against Valley’s offensive line, and forcing a turnover. Obviously winning my first in-state game as a senior felt great.” said Nick Lucarello, a DL/OL for the Wayne Hills Patriots.

The Wayne Hills Patriots take on Old Tappan on the road, Friday night, September 20 at 6:00 pm.