The Patriot Press • May 15, 2019 • https://whhspatriotpress.com/16160/sports/national-sports/uva-mens-basketball-team-declines-white-house-visit/ 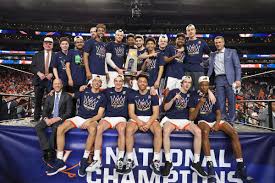 In the wake of the University of Virginia Men’s Basketball team refusal to visit the White House after a season that culminated with an NCAA Championship win, members of the Red Sox team also RSVP’d no to a similar invite.

“With several players either pursuing pro opportunities or moving on from UVA., it would be difficult, if not impossible to get everyone back together. We would have to respectfully decline an invitation, according to coach Virginia Coach Tony Bennett who

This response does not come up without scrutiny, however, as former players and even current players of UVA have been proven to be against President Donald J. Trump, which would serve as a possible reason the team will not visit the White House.

However, it must also be noted that many UVA players are busy preparing for the NBA Draft in June.

Similarly, while white members of the Boston Red Sox attended a visit at 1600 Pennsylvania Avenue, black players refused prompting speculation that President Trump’s comments two years ago about the Charlottesville rally must not sit well with the players and staff of both teams.

“With so many recent championship teams not visiting Trump’s White House, it’s no surprise you can add Virginia to that list. Team members feel that declining to visit the White House demonstrates how they feel about the current regime and this probably won’t be the last time this happens under Trump’s watch,” said Wayne Hills Alum, Jared Pohl, class of 2018.