The Patriot Press • May 15, 2019 • https://whhspatriotpress.com/15852/sports/national-sports/a-great-ending-for-dwyane-wade-and-dirk-nowitzki/

A Great Ending for Dwyane Wade and Dirk Nowitzki 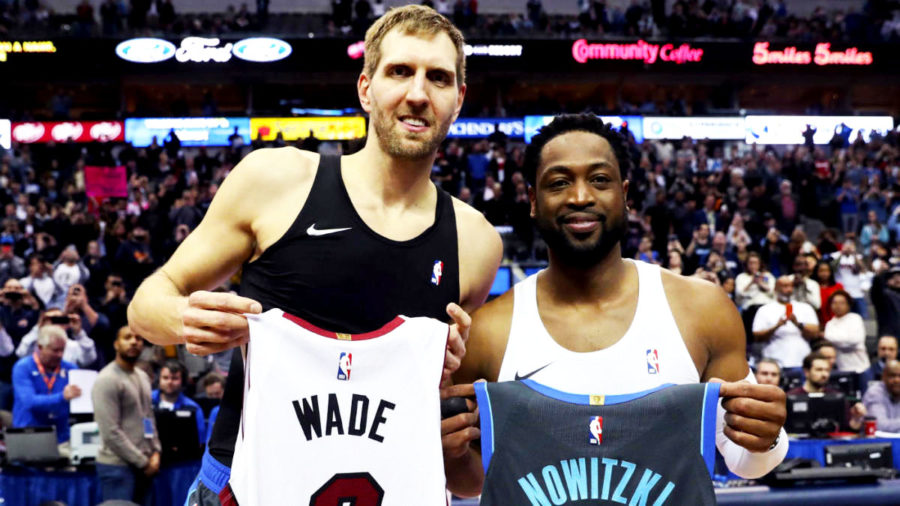 April 9th, 2019 marks a memorable night for Heat fans and Mavs fans. This date marks the end of Dwyane Wade’s career along with Dirk Nowitzki’s confirmed decision on retirement. Both NBA greats are now hanging their Nikes up as their last game was something that will be remembered.

Wade made sure that his last game would be in “Wade County,” the very place where he spent the past 16 years playing in and has become the most beloved athlete in the city’s history.After going through an emotional pregame ceremony, Wade went out and scored 30 points in 34 minutes Tuesday night to lead the Miami Heat to a 122-99 victory over the Philadelphia 76ers. The win wasn’t enough to push the Heat towards a playoff spot, but it was a great ending for Wade and his teammates. It was the perfect finish to cap Wade’s Hall of Fame career at American Airlines Arena.

“It’s meant everything,” Wade said after the game. “To be able to come here and be embraced, to find a home, to be able to grow. I think that’s the one thing. When I was on the court early on and Stan [Van Gundy] let me grow, as a player, to whether it was mistakes I made in life to whatever it was, this city has allowed me to grow.”

Fans all around and the crowd at the arena appear to be proud of what he has done for them and the team. Bringing 3 championships to the city, everyone is proud of he has done. Former teammate, LeBron James, was also very proud of Wade.

“Pressure like that could’ve hindered you,” James said of the challenges that faced those Heat teams, “but instead, it hardened you, fortifying you as a player, a man and a leader.”

Even though Billy Busacca is a Magic fan, he was very electrified during the game.

“Historic night for Wade, 30 points and the win, now that’s something,” he said.

That wasn’t all. It was also a historic night for Dirk Nowitzki. Also dropping 30 points and the win, Mavs fans are also very proud of the NBA veteran. Mavericks coach Rick Carlisle and owner Mark Cuban  gave speeches honoring Nowitzki before No. 41 finally got the microphone and casually mentioned that he was hanging up his Nikes.

“Mark, can’t wait to see what you’ve got for my jersey retirement,” Nowitzki said, smiling at Cuban. “I mean, this is a high bar that you set. But as you guys might expect, this is my last home game.”

The Mavs made a pact to get Nowitzki the ball as early and often as possible. He became the oldest player in NBA history to score 30 points, a distinction previously held by Michael Jordan.

Nowitzki finished his speech by thanking Mavs fans for supporting him “on a hell of a ride with a lot of ups and downs.” He vowed to remain a part of the Dallas community and the franchise, but Nowitzki isn’t sure exactly what’s next for him.