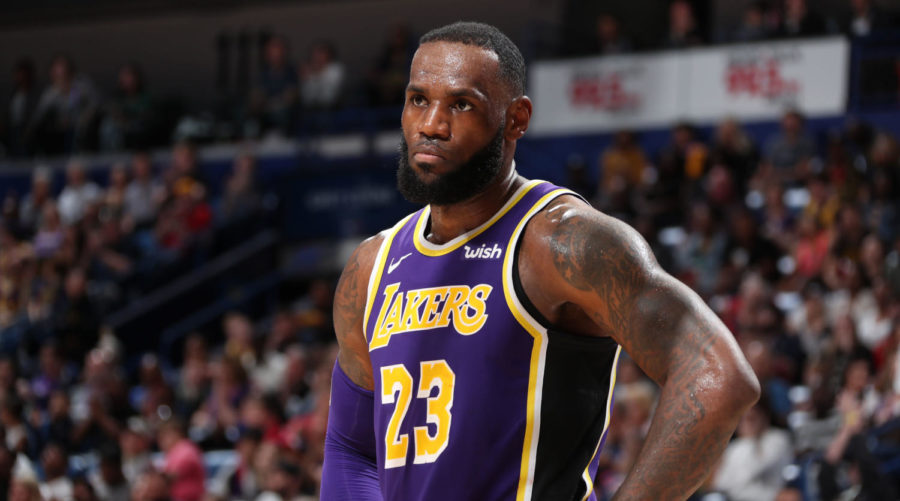 NEW ORLEANS, LA - FEBRUARY 23: LeBron James #23 of the Los Angeles Lakers looks on against the New Orleans Pelicans on February 23, 2019 at the Smoothie King Center in New Orleans, Louisiana. NOTE TO USER: User expressly acknowledges and agrees that, by downloading and or using this Photograph, user is consenting to the terms and conditions of the Getty Images License Agreement. Mandatory Copyright Notice: Copyright 2019 NBAE (Photo by Nathaniel S. Butler/NBAE via Getty Images)

The NBA playoffs are so close and so many teams are looking forward to it. Everyone in the east are looking happy, yet all of them are still fighting for their spot on the playoffs push, and everyone in the west are clearly fighting ferociously. There is a king in the west that appears to be struggling a bit. LeBron James and his team continue to struggle in the league as many fans thought that the Lakers would have a huge chance of making it to the playoffs.

You have to agree with me that LeBron James is one of the greatest players of all time. No doubt, he is a force to be reckoned with. Although, many things seem very cloudy for him and his young team as they struggle to lay a spot for the playoffs. After a loss to the Grizzlies, many people were questioning about if his team has a chance of securing a spot and that if the Lakers will be successful later on. His losses are racking up and it does not look good for him. Yes, he had losses back in the east, but that does not mean he is comfortable with it.

James told the media that he had activated his playoff mode. Everyone was so sure that since the “King”, his nickname, had activated his playoff mode, he will help lead his team to more wins and a playoffs spot. But as far as we know, that is not how things are looking. James has not missed the playoffs for 13 straight seasons and also made the past 8 NBA finals. But since he joined this new team and making new comments, he hasn’t been performing to the full extent you would want.

An executive NBA reporter who spoke to Bleacher Report saying that, “[James] killed the (Lakers’) chemistry.”

“He shouldn’t have been so public about it. Even during the All-Star draft, he laughed about (wanting Davis to be his teammate),” he continued.

Luke Walton, the head coach of the Lakers, understands James’ feelings. “He recognizes where we are and the sense of urgency we need to play with.”

A junior at Wayne Hills, Billy Busacca, believes that the Lakers do not have a chance of making it to the playoffs.

“Are you kidding me, the Lebron is good, but his team isn’t that good. He can do everything, but I don’t think the rest of the team can keep up with him,” he said.

With the playoffs nearing, many teams continue to fight for their team. LeBron James will be on the spot for the next few weeks as it nears. Can he really bring the Lakers to the playoffs? Is it even possible to bring such a young team to the playoffs and possibly finals?