Everything You Need to Know About The Netflix Hit “Bird Box” 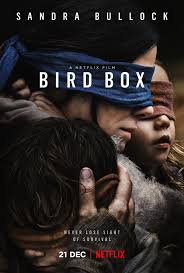 The new Netflix thriller, Bird Box, starring Sandra Bullock, Trevante Rhodes, John Malkovich, and Saura Paulson, is the latest topic of discussion among students at WHHS since its release on December 13th, 2018.

Based on a novel by Josh Malerman, Bird Box is about a mysterious force that makes its viewers imagine their worst nightmare and compels them to commit suicide. To survive, one must block their vision with a blindfold unless indoors. The film follows a group of strangers who work as a team to survive the strange phenomenon that takes over the globe.

Sophomore Julia Galesi commented, “I usually don’t like horror movies, but I actually really like this one [and] I thought it was really interesting.”

The thriller even had a celebrity cameo from rapper Machine Gun Kelly, who is notorious for his ‘diss track’ on Eminem called “Rap Devil.”

“Honestly, I think Bird Box was really overrated and unrealistic,” said sophomore Olivia O’Hagan.”Only watched it for the memes.”

Bird Box has created an uproar of memes on popular social media sites, such as Instagram and Twitter, which mock the characters’ decisions throughout the movie.

The popularity of the horror film has even prompted an online challenge called ‘The Bird Box Challenge” where someone attempts to walk around blindfolded for a certain amount of time. Some have even tried doing the challenge over a course of 24 hours.

Netflix reached out over Twitter against the internet challenge, saying “Can’t believe I have to say this, but: PLEASE DO NOT HURT YOURSELVES WITH THIS BIRD BOX CHALLENGE. We don’t know how this started, and we appreciate the love, but Boy and Girl have just one wish for 2019 and it is that you not end up in the hospital due to memes.”