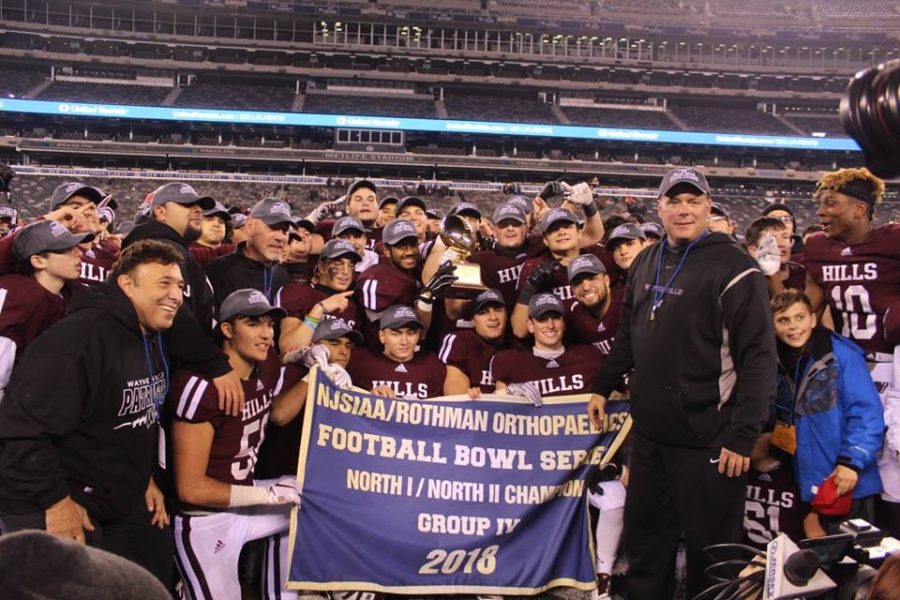 By Victoria Balduzzi and Bella Ishak

The Wayne Hills 2018 football season has come to a close with a successful win at Metlife Stadium.

The Metlife game took place on November 30 and it was a game to remember. Wayne Hills had a rocky first quarter but brought the heat after the half. Senior Jaaron Hayek had a great night with 75 yards receiving and 95 rushing yards. Senior Charles Njoku had six passes covering 118 yards and 3 touchdowns thrown from Senior Tom Sharkey.

¨The guys make it easy for me,¨ Senior Tom Skarkey says about his teammates Njoku and Hayek. The senior football players are very close and are happy to have had such a strong season.

The Patriots concluded the game with a 35-21 score and received the first-ever North Group 4 bowl game win for Wayne Hills. The team was overjoyed and Coach Wayne Demikoff could not have been any happier. Demikoff is impressed with the amount of hard work and effort the boys have put in this season. He could not be happier with the turnout.

The student section at the MetLife game was on fire and ready to take home a win. “We came here to win and we will cheer for our boys even if we lose our voices¨ said Senior Morgan Ritesma who came to support Wayne Hills. The turnout was outstanding and the atmosphere was unlike any other.  Parents of players and Wayne Hills alum are amazed at the history that was made on November 30.

The Patriots took home another state championship title, which makes Wayne Hills 10x Football State Champs. The football team is thrilled and is happy they were able to end their season on a high note.

The football team is selling championship apparel on their facebook page “Wayne Hills Football”. They can be ordered online through the link provided on their post. The apparel shop closes on December 16 at midnight.